Translation was a key feature of the intellectual and cultural life of the crusader kingdoms. Translators and inter-lingual communication appear frequently in primary sources from the period, and some of the most famous manuscripts from Outremer are texts in translation. Unfortunately, the intellectual culture of the Latin East remains in large part unexamined, though interest in the topic is growing. Scholars are beginning in particular to attend to language contact as an integral part of crusader culture. This essay offers a brief introduction to the translation of texts from various languages into Latin and French from the twelfth to the fourteenth centuries.

The Latin East was a multicultural, multilingual environment. Scholars and translators were quick to capitalize on the kingdom’s rich supply of texts, and translation efforts began soon after the First Crusade. They were most active in three main centers of translation in the crusader kingdoms: Antioch, Acre, and Cyprus. Each of these three centers enjoyed a particular period of predominance in the intellectual life of the kingdoms, and each featured a unique cultural and linguistic milieu.

The city of Antioch, taken in 1098 during the First Crusade and held until 1268, boasted a Latin population that was small in comparison with Acre or Jerusalem and was populated, for the most part, by Eastern Christians who wrote and spoke Arabic. Translators there were engaged almost exclusively in translating Arabic and Greek medical and scientific texts into Latin. This interest in scientific texts was a particular hallmark of the intellectual center in Antioch, which attracted famous western scholars with its Arabic and Greek manuscripts. These translators were, however, transient; they remained in the East for a period of months or years and then departed after they had acquired the manuscripts they desired. 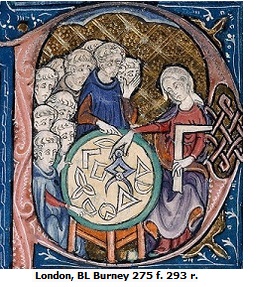 The city-state of Pisa, which earned privileges for transporting crusaders during the First Crusade, played a major role in the movement of scholars and manuscripts to and from Antioch in the twelfth and thirteenth centuries. The city-state took particular interest in the translation of eastern knowledge into Latin, and Pisan outposts in Byzantium and Antioch served as centers of collection for both Arabic and Greek manuscripts, which were then exported to the west by Pisan merchants and subsequently translated. Some Arabic sources known in the west with incomplete transmission histories may have come from manuscripts transported from Antioch by Pisan agents; Charles Burnett identifies in particular two works on weather forecasting.[1]
The most famous translator working in Antioch was Stephen of Pisa, who in 1127 produced a Latin translation of a well-known medical compendium, the kitāb al-malakī of ‘Alī ibn al-‘Abbās al-Majūsī. He also wrote a guide to Greek and Arabic medical terms that became wildly popular in the west, the Medicaminum omnium breviarium, and translated a text on Greek astronomy, the Liber Mamonis, from Arabic into Latin. Astronomical texts were popular candidates for translation in the Antiochian context: an anonymous Englishman who was a contemporary of Stephen of Pisa translated the Almagest, another treatise on astronomy, during his time in Antioch. Adelard of Bath, another English scholar, traveled to Antioch to study Arabic and likely acquired several manuscripts there that he then took back to England and translated, including Thābit b. Qurra’s Liber prestigiorum, Abū Ma’šar’s Abbreviation of the Introduction to Astrology, Pseudo-Ptolem’s Centiloquium, and Euclid’s Elements.[2]

Based on the surviving translations from Antioch, modern scholars have concluded that the scale of textual production there would have required a large number of educated scribes, translators, manuscript sellers, and Arabic collaborators. It seems unlikely, however, that scholars in Antioch produced translations for local use. Evidence instead indicates that both the manuscript trade and the translations produced in Antioch envisioned a western audience, and that Arabic and Greek manuscripts or translations of locally-owned texts were transported out of the east for consumption in western schools. This may be why Antioch itself did not develop an organized educational center; scholars there tended to be transient rather than established, and worked with the expectation of reaching an audience outside the Levant.

Acre was conquered in 1104 during the First Crusade, lost to Saladin in 1187, re-conquered in 1191 during the Third Crusade, and held until 1291. In addition to its large and diverse population of western immigrants, it was home to many eastern Christian groups, particularly those in the Greek orthodox tradition. Although these different ethnic and religious groups lived for the most part in separate enclaves, there was significant spoken language contact, especially in the courts.[3] Cyril Aslanov and Laura Minervini have both found linguistic traces of this verbal contact: Minervini through analysis of Arabic borrowings into Old French and Aslanov in a Syrian-Arabic-Old French phrasebook from thirteenth-century Acre. 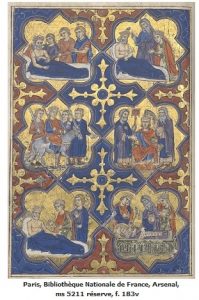 Translation activity in Acre intensified after the Third Crusade, when it became the political heart of the crusader kingdom following the loss of Jerusalem. Scribes and illuminators working in Acre produced deluxe manuscripts in Latin or French for an aristocratic Western market and more mundane books in French for sale to pilgrims. One of the most lavish of their productions, the Arsenal Bible, is a French translation of selections from the Old Testament. Like the Arsenal Bible, most translations produced in Acre were from Latin into French. It is often difficult, however, to determine whether translators working in Acre produced a text, or whether the translation was brought from the west and copied in the east. Eleanor of Castile, for example, commissioned an Old French translation of De Re Militari while in Acre, but it is unclear whether the text was actually translated there. Despite these uncertainties, it is clear that there were some translators working in Acre itself. One of these translators, John of Antioch, produced an Old French translation of two texts by Cicero for a Hospitaller in 1282.

According to David Jacoby, French translation was so prevalent in Acre because knowledge of French was a mark of status, even outside deluxe manuscript production. The Hospitallers and Templars both translated their rules into French and issued orders and instructions in French. Italian merchants wrote notarial documents in French, and the Venetian merchant Obertinof Saint Antonin produced a French will even after he fled from Acre to Cyprus in 1291.[4]

Unlike twelfth-century Antioch, where translation was primarily the domain of western scholars, thirteenth-century Acre’s multicultural society and courtly culture encouraged translation at all levels of society: from everyday spoken language exchange, to the translation of administrative documents, tothe production of deluxe manuscripts. This trend would continue in Cyprus.

Richard I conquered Cyprus in 1191. Its population, which at the time was primarily Eastern Orthodox and Greek speaking, remained largely intact after the crusaders came into power. Outside urban areas, Greek was the primary spoken language, but within the cities immigrants spoke and wrote in French, Italian, Arabic, and Latin. Translation activities in Cyprus were already underwayin the thirteenth century,[5] but they intensified after 1291 when members of the military orders, well-to-do Latin Christians, and former crusaders fled to Cyprus from Acre. 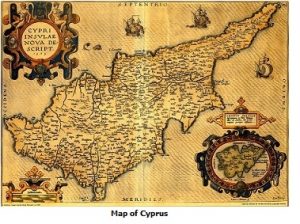 Although the literary output of Cyprus requires further study, there is definite evidence that translators there worked in a wide variety of languages and genres. Peter of Paris, a French translator working in Cyprus in the early fourteenth century, translated a psalter, Aristotle’s Politics, and Boethius’s Consolatio from Latin into French. The Dominican friar Alfonso Buenhombre visited Cyprus in 1339-1342, and while there he translated several texts from Arabic into Latin, including a Vita. The library catalogue of an Italian physician, Guido of Bagnolo, who transported his library out of Cyprus in 1368, includes Latin transitions of Arabic and Greek medical and philosophical texts.

Translators working in Cyprus probably envisioned a local audience, including members of the court, Frankish administrators, and students in Cyprus’s religious studia. These educational institutions may account for the diversity of the island’s literary output and for its abundance of notarial activity. The Dominicans and Franciscans both founded studia on the island, and other orders may have had their own schools there. Surviving library lists from a Dominican bishop suggest that the friars on Cyprus were reading texts similar to those in circulation in schools in the west.

French enjoyed a privileged position in fourteenth-century Cyprus, as it did in Acre. Most of the literary output of the island from the fourteenth century is in French, as were the notarial documents. The legal language of the courts was also French, but there are indications of polyglot influences; for example, a Greek translation of the Assises de la cour des bourgeois survives. Despite the complex linguistic milieu in Cyprus, Cyril Aslanov found by comparing texts from Cyprus and Acre that the French dialect spoken in Cyprus up to the fifteenth-century was very similar to the French dialect spoken in the Levant. This implies that the French language spoken in Cyprus was brought over from the Levant by the fleeing crusaders, andthat it was perpetuated unchanged among the ruling elite for a century. Nevertheless, the urban centers in Cyprus were distinctly multicultural, with even stronger Greek and Italian influences than Acre.

The translators of the crusader kingdom excelled in producing a wide range of texts targeted towards specific audiences. In twelfth-century Antioch, scholars translated scientific texts from Arabic and Greek into Latin for a western market. Inthirteenth-century Acre, translators produced French translations of religious, literary, and administrative texts for aristocratic patrons. In fourteenth-century Cyprus, translators workingin French and Latin drew on Greek, Arabic, and Italian sources, this time for a primarily local audience found in palaces, courts, and schools.

Translation in the Latin East as a whole bears further study, but a few lines of research in particular demand scholarly attention. First, while art historians have long debated who commissioned the deluxe manuscripts produced in Acre, the role of patronage in Antioch and Cyprus has received less attention. This is key for providing a clearer picture of the consumption and transmission of these texts. Second, the translators themselves remain largely unexamined. Famous scholars like Stephen of Pisa and Adelard of Bath have attracted a great deal of attention, but we know far less about the largely anonymous interpreters working in Acre and Cyprus. Finally, the sources of the original-language texts are often overlooked. The Pisans may have purchasedmanuscripts in Antioch, but from whom? Answering these specific questions will give us a fuller picture of the underlying purpose and processes of translation activities in the crusader kingdoms.

Burnett, Charles. “Antioch as a Link between Arabic and Latin Culture in the Twelfth and Thirteenth Centuries.” In Occident et Proche-Orient: Contacts Scientifiques au Temps des Croisades, edited by B. van den Abeele, A. Tihon and I. Draelants, 1-78. Turnhout: Brepols, 2000.

Jacoby, David. “Society, Culture, and the Arts in Crusader Acre.” In France and the Holy Land: Frankish Culture at the End of the Crusade, edited by Daniel H. Weiss and Lisa Mahoney, 97-137. Baltimore: John Hopkins University Press, 2004.

Kedar, Benjamin Z. “Gerard of Nazareth: A Neglected Twelfth-Century Writer in the Latin East. A Contribution to the Intellectual and Monastic History of the Crusader States.” Dumbarton Oaks Papers 37 (1983): 55-77.

Kedar, Benjamin Z. “Gerard of Nazareth: A Neglected Twelfth-Century Writer in the Latin East. A Contribution to the Intellectual and Monastic History of the Crusader States.” Dumbarton Oaks Papers 37 (1983): 55-77.